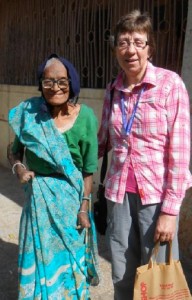 Within the account of the healing of Jairus’ daughter, used in the Easter Offering service this year, is this cameo of Jesus’ encounter with the woman with bleeding. She had suffered for 12 years, ‘untouchable’ because of her condition, and robbed of her place in society, unable to mix in the community. Jairus’ daughter was 12 years old, on the threshold of adulthood with all the potential and fulfilment this too could bring; she would be robbed of this if she was not healed.

As part of the folk opera ‘The Healer’ written by Revd. Len Shroeder, a Methodist minister in New Zealand, these words were sung by the woman with bleeding:

“Dare I touch him? I hardly know his name, I only know he cures the lame, dare I hope he’ll do the same for me?

Dare I touch him? what if there is no cure? well then at least I’d know for sure that even he could do no more for me.

I’ll hide among the crowd and while they’re pressing round, I’ll just reach out to him and hope I won’t be found.

I’ll only touch his robe, he’ll never know I’m near, He’ll never feel my hand or ever know my fear.

Dare I touch him? I hardly know his name, yet I trust him just the same, surely none can put the blame on me?

If I touch him, and find myself made clean, and steal away and not be seen, and he won’t know I’ve ever been near him…… I’ll reach out and touch him.”

In the story the crowd were waiting expectantly to welcome Jesus, wanting to “reach out and touch him” because they knew he could meet their needs. Still today, people feel ‘voiceless’, ‘outcast’, and ‘struggle to survive’ because of abuse, violence, poverty, unemployment, disability and loneliness. They want to reach out to someone, and they want others to reach out to them. The elderly woman in the picture, whose fingers and thumbs have been all but destroyed by leprosy, will be treated as untouchable by some today.

How might untouchability feel? How can you ‘reach out’ to those in need in your community, especially those others might shun or fear?

From every ailment flesh endures, our bodies clamour to be freed

Praying with the Church of North India – Women’s Voice:

We are treated with contempt and cruelty from our inception. We struggle to survive, we fear abuse and affliction, we live in a hostile society and are forced to be silent. We ask what does the Lord require of us?

Lord, reach out and touch our lives with your empowering love, that we in turn may have the courage and strength to reach out to others with the ‘good news’ of your sacrificial love for us all. Amen.