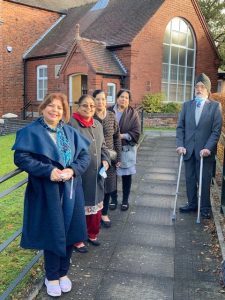 Greetings!
A number of years ago, whilst I was still teaching, I was awarded a Farmington Fellowship at Manchester Harris College, Oxford to study the part that music plays in different faiths. As I was responsible for RE and Music, it was a golden opportunity to connect with and explore the places of worship in our area having been given a precious day a week away from the classroom. I met so many lovely people who shared their faith with me and I with them.
I have spent a number of years as a volunteer at Englesea Brook Chapel and Museum of Primitive Methodism and one of the areas that they are now beginning to explore is how redundant chapels are being used. One of those chapels is in Fenton, Stoke-on-Trent, which is now a Sikh Gurdwara (Temple). Last week was Interfaith Week and an exchange visit was arranged with some of their worshippers. They came to Englesea Brook and we were able to talk to them about our faith and to listen to their faith stories. There were many similarities and we felt at home in one another’s company. We entertained them with tea, cakes and scones and then accepted their invitation to visit the Gurdwara the following Friday when it happened to be Guru Nanak’s birthday and they were holding a big celebration for their founder.
When we arrived at the Gurdwara we were invited to cover our heads and to remove our shoes before they took us into the worship area. We watched the ceremony of the bringing out of their sacred scriptures (Guru Granth Sahib) as we sat on the floor so that we were lower than the scriptures. They took immense care of their holy book, wrapping it in clean cloths, carrying it on their heads and not allowing it to touch the ground. We were given sweets which represented the good things God gives us. Afterwards Belvinder, an elder, explained all about the Sikh faith. Before we left we were given a meal even though the kitchen was a hive of activity as the women were preparing meals for Guru Nanak’s birthday, because it is the Sikh custom to offer hospitality to anyone who enters their premises. And what a meal it was too! We were given huge quantities of spring rolls, bharjis, samosas and the largest pieces of cream cake we had ever seen! We made real friendships that day and some of the women even offered to help with the school parties who visit Englesea Brook. I am hoping to involve them in MWiB and Touchstone’s ‘Whose Bag is it Anyway..? project. We can do so much more together as we have so much in common, particularly in our concern for the earth and the effects of climate change.
Can I encourage you to visit different places of worship – a good starting point would be to find out if any redundant chapels in your area are being used as a worship centre for other faiths – to form friendships and to find out about each other’s faith so that we can all work together for God’s world and the future generations of all faiths and none.
Blessings
Ruth

Could you be our next President?

By Amy Walters in CREATIVE SPIRITUALITY, PRAYER & WORSHIP, Prayer, Prayer for the week, Uncategorized on November 29, 2021

December 28, 2015 by
We use cookies on our website to give you the most relevant experience by remembering your preferences and repeat visits. By clicking “Accept All”, you consent to the use of ALL the cookies. However, you may visit "Cookie Settings" to provide a controlled consent.
Cookie SettingsAccept All
Manage consent