In line with the threefold aims of MWiB – “encouraging, enabling, equipping” – the 85 participants were firstly encouraged to think positively about progress made so far towards the original MDGs. Though at first they were widely seen as idealistic wishful-thinking, there have been significant but largely unpublicised improvements in several areas. Meg Munn, Methodist former MP for Sheffield Heeley and now working with groups promoting women’s leadership, came to share the findings of the UN 2015 report (see un.org/millenniumgoals/). There is good news in particular regarding Goal 1, where she told us that “huge progress” has been made towards lifting the world’s populations out of extreme poverty. This was measured not simply by a statistical figure of average earnings, but by evidence of individuals and families having new life choices and opportunities they did not have before; improving their living quarters, buying some land, or being able to afford to school their children, all positive signs of growth. Much is obviously attributable to political and social factors such as the growth of the Indian and Chinese economies, but through their support for the MDGs, governments and non-governmental organisations (NGOs) have also contributed in a meaningful way to this encouraging progress.

Later, participants were enabled to understand where the projects and partnerships supported through our churches are making specific differences. By means of a kind of speed-dating approach, we were sent in small groups round eight “stations” for just ten minutes at each one, where those staffing the stall breathlessly communicated the way their organisation was addressing one or more of the MDGs. Among those represented were some well known names – Christian Aid, All We Can, Christians Aware – and some less familiar. Particularly enlightening for me was the Traidcraft stall – I had taken on board the message that palm oil, so prevalent in many food and cleaning products, is a “Bad Thing”, leading to deforestation and destruction of habitats and believed that there was not much we could individually do about this. We learned that there is now a Fairtrade Palm Oil offering, from Ghanaian producers who grow their crop with environmental sensibility, and were urged to look out for these products (see fairworldproject.org). 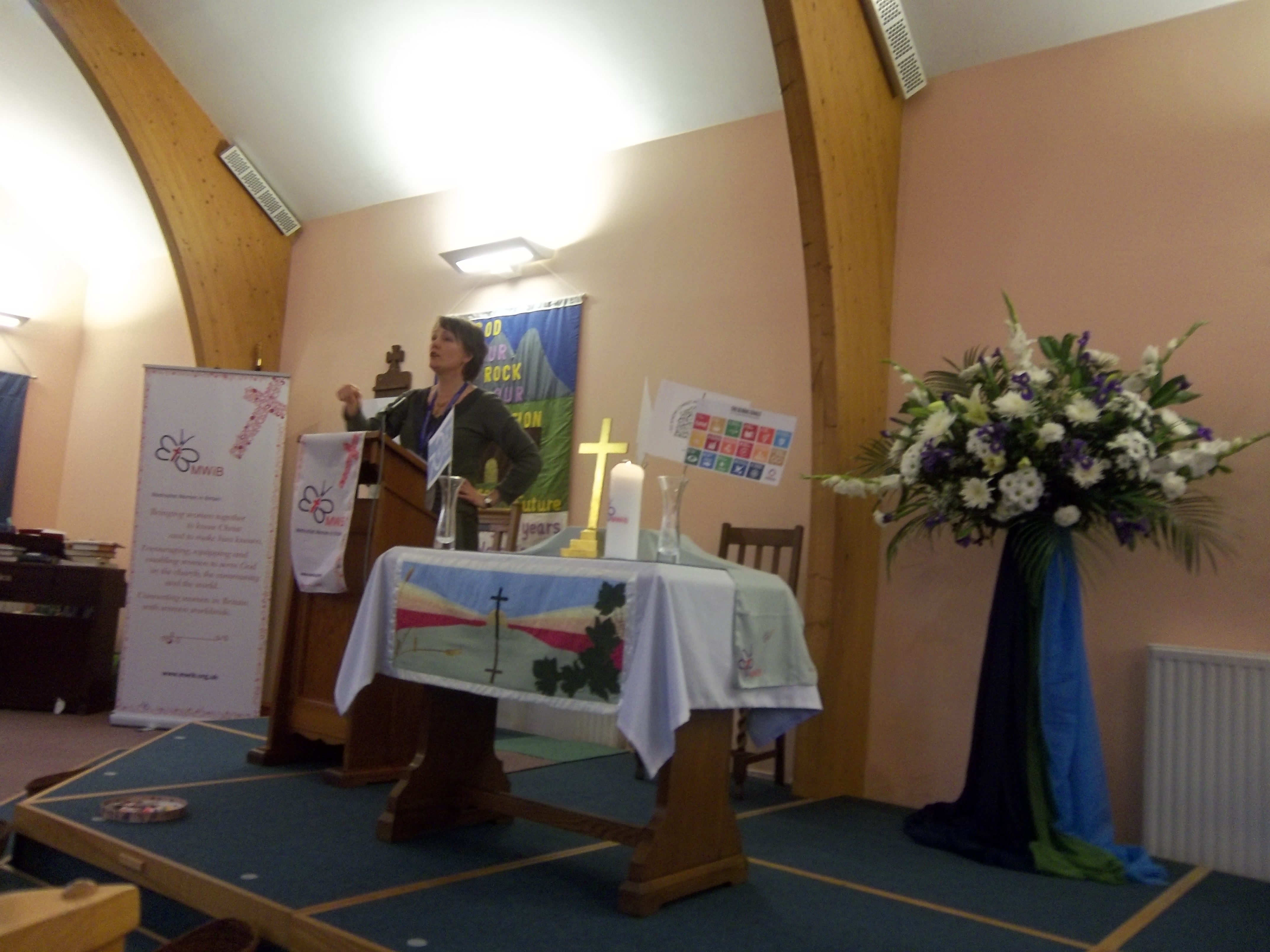 Equipping people in our churches to speak, act, campaign and work for justice is the third strand of MWiB’s approach. Many feel uncertain that they know enough to say or do the right thing, or even that what they do say or do will make any difference. To build on the successes and address the weaknesses of the work already begun, the UN has now set 17 new Sustainable Development Goals (SDGs) to be reviewed again in 2030. This number may seem a little unwieldy, but the new goals are largely refinements of the originals. The apparently “us and them” approach of developed countries making targets for progress in the developing world was not adequate, so this new endeavour represents a coming together with the understanding that we all work in partnership, every country playing a role to its own ability. It is also recognised that gender equality and parity of opportunity for women and girls is absolutely key to the success of many of the goals, and also that it is crucial to address with urgency the challenges of climate change and environmental factors which already disproportionately affect the lives of the poorest in the world.

To find out more about the Sustainable Development Goals, or Global Goals as it is hoped they will become known, go to globalgoals.org for information and resources.

Many thanks to Towcester Road Methodist Church, Northampton, and especially the team led by Liz Marriott, MWiB Communications Officer, for organising such an inspiring and well-run event.

HOSANNA! The Road to Easter

News from Nottingham and Derby District

May 17, 2017 by
We use cookies on our website to give you the most relevant experience by remembering your preferences and repeat visits. By clicking “Accept All”, you consent to the use of ALL the cookies. However, you may visit "Cookie Settings" to provide a controlled consent.
Cookie SettingsAccept All
Manage consent