Our District Autumn Day was held on Wednesday 16th October at Trinity Methodist Church, Congleton. A cheque for £6000 was gratefully received by Bibusa Musukwa, the Supporter Relations Officer for ‘Hope for Justice’, a charity concerning modern day trafficking. This has been the project of our outgoing President, Kath Roberts. Bibusa, pictured above, updated us on the work of the charity and explained how the money was to be used.

Our new President, Sylvia Harrison, will take as her theme ‘Invisible Women’, and has chosen to support the charity ‘Hamlin Fistula UK’ which supports women whose bodies have been damaged in childbirth, providing surgery and support so that they can again lead normal lives. Laurence Parkes, the Company Secretary for the charity, showed a film about their work in Ethiopia and explained that each woman treated was given a blanket and a new dress on leaving the hospital, to give them dignity and respect. 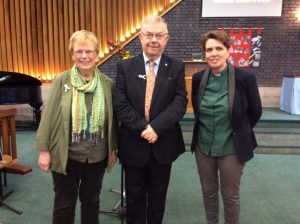 By Judith Simms in PRAYER & WORSHIP, Prayer, Prayer for the week on November 4, 2019

By Hilary Evans in President's Blog on November 4, 2019

Stepping Out: Reflections of a Circle Dancer – Winner

An evening of readings for Spring and Easter