Epworth Old Rectory (EOR) has gathered, catalogued and curated the Methodist Women in Britain (MWiB) Collection since 2015.  An exhibition was staged during 2016 and 2017 telling the story of the different women’s movements in the Methodist Church from the nineteenth century to the present day.  Gillian Crawley, Development Manager at EOR, introduces the 2018 exhibition and shares an invitation:

A new exhibition has been launched at Epworth Old Rectory which shows how the members of the Methodist Women’s Network banded together nationally to demonstrate their support of the Black Sash movement in South Africa which was working to have apartheid abolished.

The new exhibition Over the Rainbow is at the Rectory until 31st October 2018 and is the second exhibition telling the story of women’s campaigning within the Methodist Church.   Over the Rainbow was a national campaign organised by Network which culminated in June 1990 with a rally and vigil at Central Hall, Westminster.  It was so large that there was a second meeting point at Kennington Park, London. Women, in their districts or individual churches, made banners, or ribbons as they were called, and came from all across the UK to converge on London for this special day.  We have photographs and reports of the event which show how massive the turnout was for these women to stand in solidarity with their peers in South Africa.  Afterwards, many of the banners were put up in their home churches, while others were sent to the Black Sash movement in South Africa to replace ribbons which had been defiled or destroyed by the police, but of the hundreds made, very few still survive 28 years later.  At the Old Rectory we are privileged to give a home to 20 of the ribbons still in existence.

The exhibition was curated by Amy Wilkinson and was officially opened to the public by Bishop Ivan Abrahams (General Secretary of the World Methodist Council), who in his opening speech told us how this exhibition was close to his own heart, as his mother was a founding member of the Black Sash movement. He spoke too of his earliest memories of the Charles Wesley hymns he heard in childhood, of his friendship with Nelson Mandela, and giving the sermon at Madiba’s funeral. 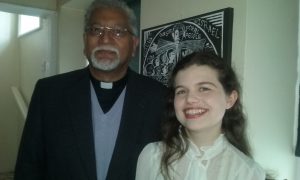 Bishop Ivan with Amy, the volunteer who
created the Over the Rainbow display

The Old Rectory would like to thank all the women who stood in solidarity, and who kept the banners which were eventually donated to the Old Rectory.  If you have a banner or a memory of that day, Gillian would be delighted to hear from you.

You can read more about the MWiB Heritage and Archives project on the mymethodisthistory website
For more information about EOR, visit the Epworth Old Rectory website

Muscle of Love - Use it or Lose it!