Scotland’s District Day in May was led by the Revd Jackie Bellfield on the theme of ‘Those Who Wait’. To illustrate the theme, Jackie used the example of Abraham’s wife Sarah, and Mary, the mother of Jesus.

In the morning Jackie took us through the story of Sarah, which she subtitled ‘Finding God in Disappointment, Doubt and Delay’.  She told us how Sarah was waiting on God and that her story could be divided into: the calling, the fear, the longing, the visitors and the laughter.  Each section was expanded using the relevant Bible passage and some were illustrated with modern songs.  There was also time for discussion at some points. 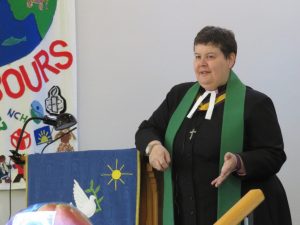 During lunch there was a Bring and Buy stall which raised £155 for the school that we are building in the Congo.

After lunch we looked at Mary’s story of waiting.  As part of this theme we were shown a video where some young children were left alone in a room with a marshmallow and told they could either eat it straight away, or not touch it and be given another one when the lady came back after a few minutes!  Most of us were wanting to eat the marshmallows straight off the screen, never mind the children!

Another video showed a young girl expressing how Mary might have felt, which was most thought provoking.  There was also group discussion about the fact that Mary lived under a cloud, so how do we cope with the clouds over our lives?

The day ended with Communion.

The only slightly disappointing thing was that numbers were lower than we would have liked as a certain royal couple booked that date for their wedding after our day had been arranged!

2018 Joint Winner 1 – At the heart: A prayer pilgrimage… with a difference

Stepping Out: Reflections of a Circle Dancer – Winner

June 28, 2017 by
We use cookies on our website to give you the most relevant experience by remembering your preferences and repeat visits. By clicking “Accept All”, you consent to the use of ALL the cookies. However, you may visit "Cookie Settings" to provide a controlled consent.
Cookie SettingsAccept All
Manage consent