In the Southampton District there have been three Roadshows in three parts of the District – Dorchester, Reading and Meon Valley – with the theme ‘Come to us Creative Spirit’. Each day included a bible study led by a member local to the venue, news from the District and  Forum, including Swanwick Conference, where possible, highlighting the justice message and the ideas of Craftivism. Worship was a key element, as well as opportunities to try ‘creating’ in workshops, offering flower arranging, card making, writing scrolls for Touchstones official opening, and circle dancing. 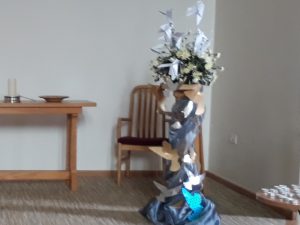 Information about the 2017/18 Partnership with Albania Hope, who work to train and educate young people to help reduce human trafficking, and reduce poverty, was shared, including a visit of some of the District committee to Albania to see for themselves. Various regular activities, such as a monthly Fairtrade café, and events, such as the What’s Trafficking? day have raised over £7,000 for Albania Hope. 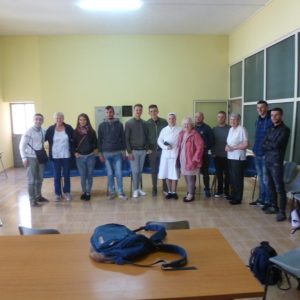 Those who attended the Roadshows gave positive feedback about the days, but numbers were quite low at two of them. We are finding that some older women who have been faithful members in the past are now finding it difficult to spend a whole day at a meeting, or to manage transport to reach the venues. We need a rethink.

Easter Offering services were  generally well attended, and the theme  and format of this years’ service was praised.

A Sharing Day at Chandler’s Ford Methodist Church in July was led by Sister Imelda Poole [a Mary Ward Loreto sister, pictured below] from Albania Hope. She shared the experiences of the charity in a down to earth, straightforward-talking way, which resonated memorably with all present.

In August Helen Cornick, who has been MWiB enabler in the District, moved with her husband  Rev’d Peter to the West London Mission based at Hinde Street. We wish her well in her new situation and look forward to hearing about the MWiB activities in the capital. Chris Stuckey has become our new enabler.

By Judith Simms in PRAYER & WORSHIP, Prayer, Prayer for the week on November 13, 2018

Manchester & Stockport MWiB Inspired at the “At Home” Service

VIDEO MESSAGE FROM ARGENTINA – HIGHLIGHT OF A SPECIAL DAY!

March 5, 2018 by
We use cookies on our website to give you the most relevant experience by remembering your preferences and repeat visits. By clicking “Accept All”, you consent to the use of ALL the cookies. However, you may visit "Cookie Settings" to provide a controlled consent.
Cookie SettingsAccept All
Manage consent