I recently had a trip ’up north’ with my husband. We spent some of the time in Durham, and took the opportunity to visit the cathedral. It was many years since we had been there, but it is no less impressive, standing solidly atop a hill, and adjoining the castle built by one of the early Prince Bishops as a secure place from which to deter any Scots invaders.
From the moment we stepped over the threshold we felt the mixture of history and modernity it holds. A wooden sculpture near the entrance, in what is known as the Galilee Chapel depicts the annunciation – a carved Mary by Josef Pyrz, the Polish sculptor, which I found beautiful and moving. It stands close to the tomb of the Venerable Bede, where an inscription on the wall reads ‘Christ is the morning star who when the night of this world is past brings to his saints the promise of the light of life and opens everlasting day.’
We were particularly struck by the people visiting the cathedral. They were of many nationalities, and all ages. There was a real ‘buzz’ in the place and I did not see a sad face. That was such a pleasure in seeing people sharing the atmosphere of the place, as well as the social side of meeting friends and strangers. I found myself reflecting on why it was so striking, and I think it was because it is not something which happens often enough. Many of our churches do not have a wide mix of people from different backgrounds and ages, and somehow we have lost the vibrancy that that brings. 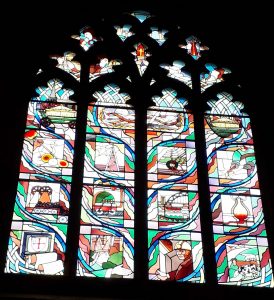 Added to that, there were plenty of easily recognised stewards and clergy throughout the building. They were not ‘pushy’, but they were very happy to engage in conversation and were obviously very proud of their church. I was interested in a new glass porch, both inside and outside the main door, which is nearing completion. It has emphasised some lovely carved stonework around the door, and will provide a welcome to visitors while not allowing heat in the building to escape. One of the clergy explained all this to me and we shared thoughts on the importance of welcome and making people feel at ease.
There are many high quality building and art works which have enhanced the building over centuries, but I was particularly drawn to the four modern stained glass windows. One depicts the Last Supper. It apparently is known locally as the cabbage window because it is as if one is looking down from above and seeing the tops of the disciples heads. Another features many of the skills and trades that were ‘traditional’ in the North East. Then the Transfiguration window, made in memory of Bishop Ramsey, and designed by Tom Denny. It is very eye catching, but one needs to look closely, for there is much detail in its panels; people in close proximity in different states of being, and Christ depicted slightly above the centre and to the right.

The most recent beautifully shows the colours of the sea. It has been donated by the Pilkington family in memory for their daughter who died whilst at the University.
Finally, a large Pieta, carved from beech, shows Mary standing over the body of Jesus. The wood retains its natural colour. One can still see the solid trunk from which the pieces were carved by Joan Lawson. I stood beside it for some minutes close to tears. These words of Joan go with the pieces;

The love from this universal mother,
Freed from the tree
Flows through her fingers,
Shiny; polished; hands on hands,
All take her blessing,
And remember her presence,
Her beauty travels with them
To strangers in faraway places. 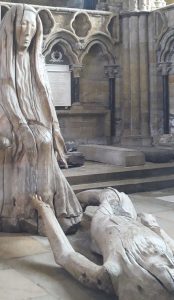 This week as our country embarks on a new phase in its history, may we take that blessing, and the atmosphere of enjoying the company of all people, with us always.

By Judith Simms in PRAYER & WORSHIP, Prayer, Prayer for the week on February 1, 2020

By Hilary Evans in President's Blog on February 1, 2020