I came across the work of Norman Cornish quite recently. He was the son of a miner, and became a miner himself  at a young age in the Durham coalfield. He was also an artist . He always drew. He drew what he saw around him, and his work has a reality and authenticity, which I found very moving, and was reminded of much of my childhood. He was of my parents generation, but his work shows that life for most people did not change that much until around the 1960’s.

So, I invite you to spend a little time looking at a few of his sketches of women; reflect on the roles that many women played in support of their families, and still do in many ways, but also how women’s lives have altered and adapted over time. 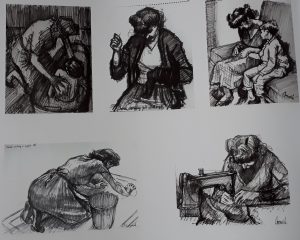 By Judith Simms in PRAYER & WORSHIP, Prayer, Prayer for the week on February 16, 2020