The Salford Circuit Easter Offering Service took place at Monton Methodist on a recent Sunday Evening. Part of the display was contributed by the Junior Church Members of Monton and Patricroft Churches. The church had a display in the communion area reflecting on the stories and the theme Shine like Stars. There was a short meditation in the service given by one of the church’s younger members. 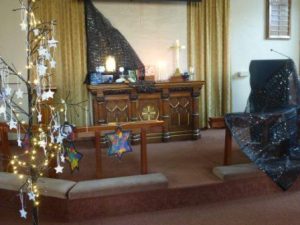 [Photos left and above are from the Salford Circuit event]

We recently held our service with the theme Shine like Stars at Davenport. We used the set service – with a bit of tweaking! There are 8 churches in the Stockport circuit and a member from each church took part. We raised £945.48 through the envelopes and the offertory on the night.

The annual Easter Offering service was held at Ketton Methodist Chapel on Sunday 7th May with the theme Shine like Stars. Ketton chapel made us very welcome and before the service we shared fellowship over a cuppa and cakes.

This year we joined with our new friends from the South Lincolnshire Circuit who took part in the service, and as a sign of unity, the Lincolnshire MWiB Forum rep Rite Rowe was also welcomed and led the prayers.

All were given a star and wrote their concerns and prayers on it; these were then put on the cross as a symbol of leaving our prayers with Jesus. After the service the prayers were shared around both Circuits and used in various prayer meetings during the week. 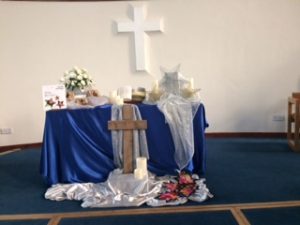 The photo above is of the display used at our Easter Offering service for the circuit on 14th May at Ashbourne. It was a well attended event with a well received reflection.

Open Hands and Space to Grow

January 16, 2018 by
We use cookies on our website to give you the most relevant experience by remembering your preferences and repeat visits. By clicking “Accept All”, you consent to the use of ALL the cookies. However, you may visit "Cookie Settings" to provide a controlled consent.
Cookie SettingsAccept All
Manage consent